TMK upgrades steel production through cooperation between its production sites

ETERNO, a TMK company, manufactured and delivered a custom-made grab bucket to TMK – Yartsevsky Metzavod (TMK-YMZ), also a TMK company. The bucket, which is part of a new heavy engineering product line, is used to pick up and transport metal charge to an electric arc furnace. Th... TMK has introduced modern technology to optimize production and improve the quality of steel produced at its Pervouralsk Pipe Plant (PNTZ). The project being implemented at the plant comprises initiatives to digitize, automate and robotize production. During phase one of the pro... TMK and the NTI Platform partner to drive joint innovation

TMK and the National Technology Initiative Platform (NTI Platform) have agreed to jointly develop and promote innovative projects. A cooperation agreement to that effect has been signed by Igor Pyshmintsev, TMK’s Director for Research Development and CEO of TMK’s R&D facility... TMK and IRE-POLUS to use laser technology in pipe manufacturing

TMK, one of the world’s leading producers of tubular products for the oil and gas industry, and IRE-POLUS, the founder and a core asset of IPG Photonics Corporation, an R&D group, have signed a programme for joint development and adoption of laser technology in pipe manufactu... The greatest potential for developing industry ecosystems lies within digital

TMK believes that the digital environment offers the greatest opportunity to pool resources in order to strengthen the position of Russian industry. This was the message conveyed by Dmitry Yakob, TMK’s IT Director, when he spoke at the forum on Industrial Policy in Implementing t... TMK is ready to supply high-tech products for the hydrogen cluster being built in the Sakhalin Region, as announced by Sergey Rekin, Director for Development and Technical Sales of TMK Premium Products, speaking at the Sakhalin Oil & Gas 2021 energy forum in Yuzhno-Sakhalinsk... TMK began pilot operation of a production and sales planning system with a planning horizon of up to 18 months. Based on the SAP Integrated Business Planning (SAP IBP) solution, the project will streamline TMK’s key business areas to replace annual planning of sales and operation... 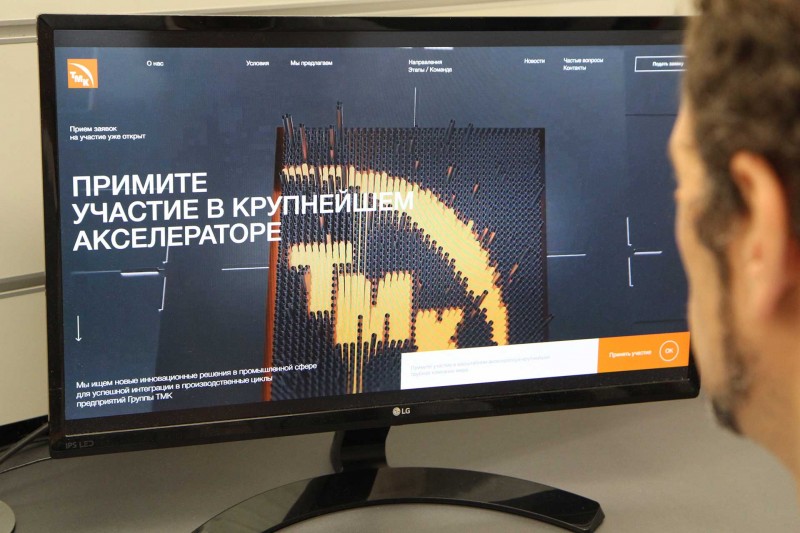 TMK to launch its own accelerator to attract high-tech startups TMK will continue the digital transformation of its business and is confident in its IT tools, but also intends to reduce the risk of cyber incidents through a range of information security measures. This was announced by Igor Korytko, CEO of TMK, at the INNOPROM-2021 internation... TMK delegates its administrative matters to a corporate chatbot

TMK and PARMA Technologies Group, a Russian IT company, in a technological partnership with Microsoft, have implemented a corporate chatbot at TMK to automate the processing of administrative and general matters. The interactive assistant with integrated artificial intelligence h... TMK will spend more than RUB 500 million to upgrade pipe heat treatment equipment at Pervouralsk Pipe Plant (PNTZ), enabling the plant to reduce resource consumption and expand its size range of high-tech products. During phase one retrofit, a roller hearth furnace in... TMK and Moscow Agency of Innovations launched an accelerator program as part of the PipeIndustryTech track of the Moscow Accelerator. A total of 30 teams took part in the program for a chance to implement their projects at TMK enterprises. The participants will have a number of... Chelyabinsk Pipe Plant (Chelpipe), part of TMK Group, has installed a new high-precision laser scanning system to detect surface defects on flat-rolled products – a project worth over RUB 20 million. The automated system came online at the forming line at Vysota 239, a lar... TMK has commissioned autonomous thermal power plants (TPPs) at its Pervouralsk Pipe Plant (PNTZ) and Chelyabinsk Pipe Plant (Chelpipe) to supply electricity and heat to the facilities. Partial transition to power supply from own TPPs has enabled us to improve the energy mix at pr... Sergey Chikalov, TMK’s Deputy CEO for Technological Development and Technical Sales, presented to Dmitry Medvedev, Deputy Chairman of the Russian Security Council and Chairman of the Board of Trustees of the Skolkovo Foundation, a project to introduce digital twins... TMK is implementing robotic process automation (RPA) in its business processes to handle market research, HR and administration. A pilot RPA project run at TMK’s Marketing Directorate has sped up execution fivefold in some areas. As part of the ongoing In Country Value “ICV” initiatives TMK GIPI’s management are pleased to announce the final stage of completing 8”-24” mill expansion for manufacturing of smaller sizes 6”-7”, which are used for oil and gas well delivery and currently sourced from overseas market.

TMK, one of the world’s leading producers of tubular products for the oil and gas industry, and Italian SMS MEER S.p.A have signed contracts for the manufacture and supply of advanced equipment for seamless pipe heat treatment facilities to be built at Seversky Tube Works and TMK-ARTROM, Romania.

TMK commences production of pipes for hydraulic cylinders at TMK-ARTROM

TMK-ARTROM (Slatina, Romania), a TMK subsidiary, has commissioned a new Workshop to produce precision pipes used in the automotive industry and hydraulic cylinder manufacturing. The opening ceremony was attended by Romanian state secretary of economy Popa Maricel, and local authorities of Slatina municipality.

TMK, one of the world's leading producers of tubular products for the oil and gas industry, has run ISO 13679:2002 CAL IV tests on the premium connection ТМК UP PF with lubricant-free coating GreenWell.

TMK, one of the world’s leading manufacturers of pipe for the oil and gas industry, and LUKOIL signed an R&D cooperation programme for 2014-2016, providing for the launch of import-substituting and new types of high-performance tubular products that would meet the current needs of the oil and gas sector.

TMK has implemented a new technology of lubricant-free coating for threaded connections – Green Well. Casing pipes with TMK PF premium connections and the innovative coating were used for assembling casing columns run into the wells at Rosneft's Vankorskoye field.

TMK, a leading global manufacturer of tubular products for the oil and gas industry, has signed an agreement with the Skolkovo Fund (the “Fund”) to open its research and development facility in the Skolkovo Innovation Centre. The agreement was signed by Dmitry Pumpyanskiy, Chairman of TMK’s Board of Directors, and Viktor Vekselberg, Skolkovo Fund President.